400-mile mission to ‘hook up’ the homeless

If you saw Dean Roff walking down the side of the road – covered in tattoos, backpack slung over his shoulder, wearing dirty clothes and a baseball hat, with his face hidden beneath an overgrown beard and unkempt hair – what would be your first impression? Homeless? Criminal? Dangerous? Unapproachable? But if you met this apparent vagabond, you would soon discover that he is really an angel in disguise.

Starting on July 24, Roff has been walking from Cleveland to his hometown of Louisville, Ky. (around 400 miles), with his 3-yr-old dog Iris to raise awareness about homelessness. He’s guessing it’ll take him around six days, with the goal of reaching his destination by early next week. Roff is sleeping wherever he finds a place to set up camp along the way. For the journey back to Cleveland, he still hasn’t figured out his mode of transportation.

When I first met Roff, founder of a nonprofit organization called Homeless Hookup CLE, I had to ask: “What’s with the name? It almost sounds like a homeless dating service.” He gave me a knowing smile and explained that the name originated from “hooking up the homeless” with some much-needed supplies, such as soap, toothbrushes, wipes and food.

“I would walk down the street and say, ‘Hey, let me hook you up,'” he shares.

Roff, a mixed martial arts fighter and personal trainer, spends his free time collecting donations through an Amazon Wish List, packing the items in plastic bags, and personally distributing them to the large homeless community in Cleveland, both east and west sides. Twice a week, Roff hits the streets of Cleveland, delivering kindness and personal connection to anyone he meets.

Roff’s motivation is a personal one. His father, who spent much of his life on the streets suffering from addiction, died homeless. Sadly, the police identified his body with dental records, which is how Roff was notified of his death.

After this devastating news, Roff drove through areas of Cleveland where people who are homeless gather and did a survey, asking each person what they needed most. Based on those answers, he started to assemble goody bags, and since then has created the Wish List so that others could contribute to this huge endeavor.

Though Roff does the foot work, he doesn’t take any credit, unless it comes in the form of a simple “thank you” or hug from someone on the street. He says Homeless Hookup would not be possible without all the generous donations and support. Humble and passionate, Roff explains, “Me? I’m not doing this. I’m a felon. I’m one bad decision away from ending up on the streets.” He attributes the growth of the organization to the many “angels” he has met along the way.

With a duffel bag full of care packages, Roff walks down streets in Cleveland that many people avoid. “Aren’t you worried about your personal safety?” I ask. He shakes his head, “No, because I was one of them.”

A recovering alcoholic, Roff once lived on the streets. He knows what it’s like to be homeless. “They’re afraid, too,” Roff says. One thing he says is true of all homeless communities: They look out for each other.

Though he receives many product donations through Amazon, he still needs monetary donations to fuel his other Homeless Hookup projects. One idea is to have a little fun with the organization’s name. Roff suggests a future  “hook up with the homeless” monthly date night – including dinner and new clothes, courtesy of Homeless Hookup.

While many of us see a disheveled or unkempt person and look the other way or cross the street, Roff sees a person who is just as deserving as anyone else. 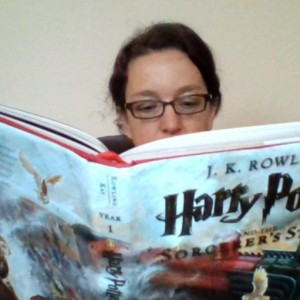 Writer and dreamer, full-time physics editor, and mom of three. I enjoy finding humor in the midst of chaos, and I try not to take myself too seriously. I love adventure and dislike schedules. You can usually find me flying by the seat of my pants or sitting on a beach.
PrevPrevious postLemons to Lemonade: Turning Life’s Hardships into Adventures in Advocacy
Next post‘A Color Removed’ Questions Perceived SafetyNext